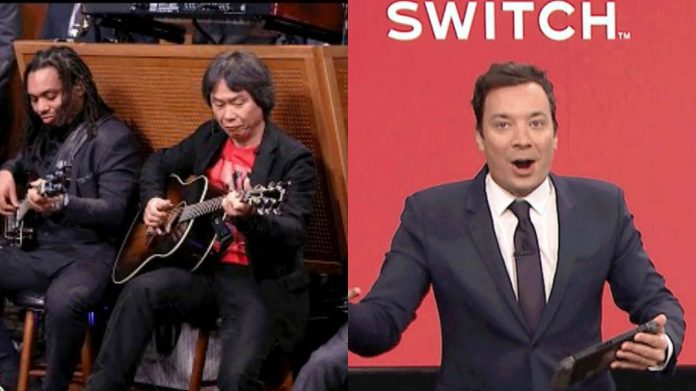 It was a big night for Jimmy Fallon on the most recent episode of The Tonight Show as Nintendo’s Reggie Fils-Aime stopped by, and he brought some special toys, along with a special guest. Reggie let Jimmy Fallon play the new “Super Mario Run” mobile game, and he also revealed that Mario creator Shigeru Miyamoto was in the audience.

Fallon geeked out big time, and luckily Jimmy Fallon’s skills in Super Mario Run got the seal of approval from Shigeru Miyamoto.

Jimmy gets the seal of approval from Shigeru Miyamoto himself! #FallonTonight pic.twitter.com/luix5xM8hu

However, the best was still yet to come as Reggie unveiled the Nintendo Switch, and let Jimmy Fallon play “Legend of Zelda: Breath of the Wild.”

Shigeru Miyamoto stole the show with his seal of approval, and he also joined The Roots to play a very familiar tune. Miyamoto sat in on the guitar with The Roots as they played a rendition of the “Super Mario Bros.” theme, and they nailed it. Check it out below.

“Super Mario Run” will be released for iOS on December 15, 2017, and it is set to be released for Android in 2017. The Nintendo Switch will hit stores in March of 2017, and the release date for “Legend of Zelda: Breath of the Wild” has yet to be announced.