Marvel revealed a big spoiler in the latest trailer for “Captain America: Civil War” and it was placed right in front of our eyes.

One of the biggest moments everyone’s talking about from the recent “Civil War” trailers is the scene where Cap and Bucky team up to take on Iron Man. Some fans dug a little deeper when watching the latest trailer and discovered that the fight doesn’t end all that well for Bucky.

In one of the frames a shot of Bucky laying on the ground can be seen while Cap fights Iron Man. But Bucky looks a little bit different because he’s missing his bionic arm. Check it out below. 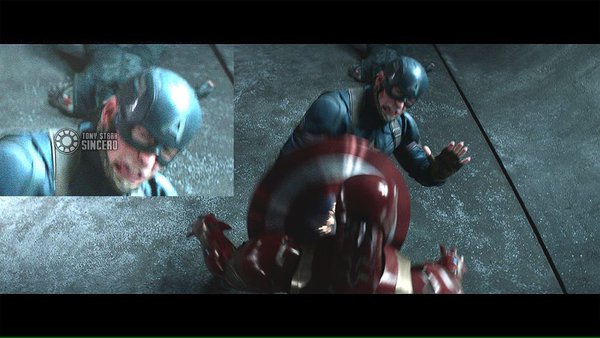 Poor Bucky just can’t seem to keep his left arm attached can he? Sebastian Stan did recently tell EW that “Civil War” gets a little “heartbreaking.” And there are few things more heartbreaking than losing your arm for the second time.

“Captain America: Civil War” opens every on May 6 and you can check out the latest trailer below.