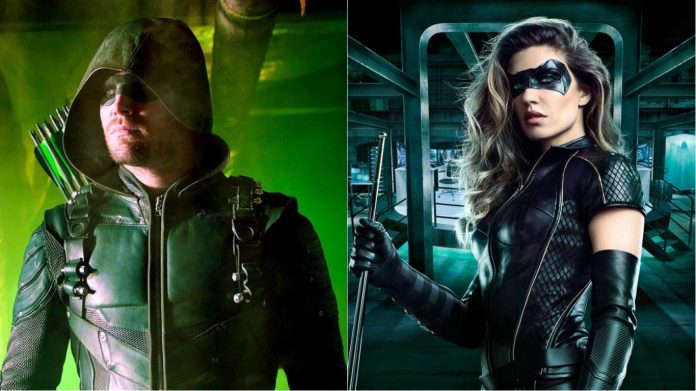 This week’s episode of “Arrow” featured a big change to the status quo at the end of the episode, so if you’re not caught up just be aware that this post contains spoilers.

At the end of “Tribute” Oliver Queen met with Diggle in the bunker and asked him to take over as the Green Arrow, and Diggle agreed.

Diggle and Dinah Drake have become close ever since she joined the team, and throughout “Tribute” Dinah was grilling Diggle about his issues. He revealed that he took some shrapnel during the explosion on Lian Yu, and he’s dealing with nerve damage and PTSD.

Diggle’s status has brought up some serious questions about whether or not he’s fit to be out in the field, because he now has problems firing a gun, so he probably won’t be much better at shooting a bow and arrow.

Dinah Drake is the only one who knows about Diggle’s issues right now, and next week she’s going to find out that Diggle is the new Green Arrow. During a recent interview with CBR, Juliana Harkavy said that Dinah will go along with Diggle’s new identity, but she will be reluctant to do so.

“I think Dinah’s really flexible. On many levels, she’s willing to do whatever it takes to get the job done, so when it comes to justice and when it comes to these things… She goes with it, but — again, because she knows that there’s something happening with Dig — there might be a little bit of reluctance. Ultimately, I think she’s going to find a way to… She’s going to try to become her best self. She’ll need to fight harder and do more, because — without Oliver — the team really needs to be at their best. But the Diggle thing is concerning.”

How long do you think Diggle will last as the Green Arrow? Sound off in the comments below.

“Next Of Kin” will air next Thursday on the CW.