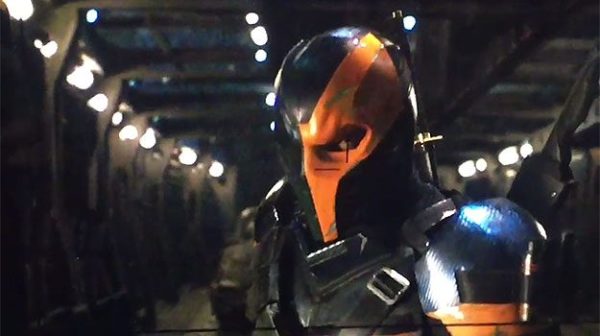 Deathstroke is all the rage right now thanks to Manu Bennett’s return in “Arrow” season 5, and it’s been confirmed that we’ll be seeing a lot more of him when the show returns for season 6 in the fall. Business has certainly picked up for the Deathstroke of the “Arrowverse” but unfortunately his big screen counterpart isn’t getting quite as much attention.

It’s been almost a year since Joe Manganiello was confirmed for the role of Slade Wilson in the DCEU, and it appeared that Warner Bros. had big plans for the character going forward. Manganiello seemed thrilled to be in the role, and he teased a fresh take on Batman during an appearance on Mark Madden’s podcast last November.

“It is. That’s true. When I met Ben we sat down and we talked about, you know, the role. We talked about the movie. His take is a fresh take but I think the audience is going to be surprised. Because it’s a road that no one’s really gone down that’s completely integral to, you know, who Batman is. And I think it’s gonna be refreshing but at the same time completely familiar. But it’s going to take this franchise in a direction that I think A LOT of people are going to be really happy about.”

As you tell from the quote above, Joe seemed pretty excited about the role, and it seemed that Deathstroke was set to become the main villain of Ben Affleck’s first standalone Batman movie, but a lot has changed since then.

Ben Affleck is no longer directing the film, and the new director Matt Reeves has confirmed that Ben’s original script has been scrapped, and the film is starting over with a whole new story.

Deathstroke’s involvement with the new story hasn’t been confirmed, and during a recent interview with THR, Joe Manganiello was tight lipped when asked if he knows anything.

“I don’t. Well, I do but nothing that I can share. I know everything but I can’t say any of it.”

The interviewer then asked if his comments were meant to be portrayed in a happy or downtrodden tone, and Manganiello didn’t budge.

When Manganiello was asked when fans will find out if Deathstroke will be in the film, he noted that’s a question for the studio.

Unfortunately not much is known about Ben Affleck’s Batman film at this point in time, but hopefully progress will be made now that the movie has a director who is passionate about the project. Hopefully he’ll also find a way to include Deathstroke, because it would be a shame to let this casting go to waste.