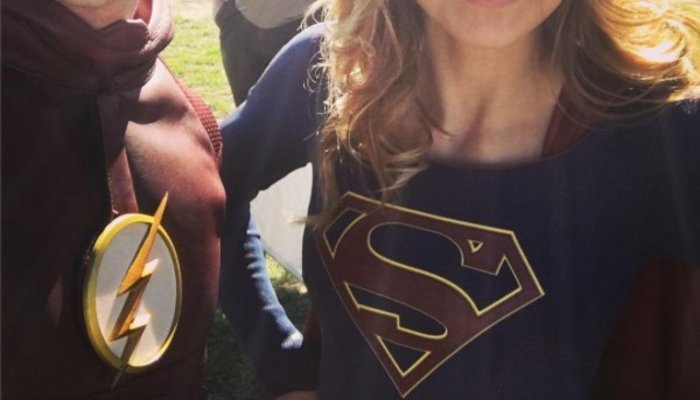 Rumors had been going around the Internet for months saying that there were plans in the works for Grant Gustin’s Barry Allen to make an appearance on “Supergirl.” Those rumors were recently confirmed as Gustin is set to join the March 28 episode titled “Worlds Finest.”

Now The Flash has posted a behind the scenes photo from the set of “Supergirl” of himself and Melissa Benoist both in costume.

They do look pretty good together don’t they? Supergirl made a brief cameo appearance on last night’s episode of “The Flash” titled “Welcome to Earth-2.” While Barry, Cisco and Harry were going through the breach from Earth-1 to Earth-2, Benoist’s Supergirl could be seen for a brief second while they were crossing over.

It remains to be seen how these two heroes will cross paths. But the possibilities are now endless with the introduction of the multiverse. The lack of apostrophe in the episode’s title “Worlds Finest” seem to be a hint that we’ll be exploring an entirely new world when Barry Allen makes the trip to National City.

See “The Flash” crossover with “Supergirl” when “Worlds Finest” airs on CBS March 28 at 8pm EST.