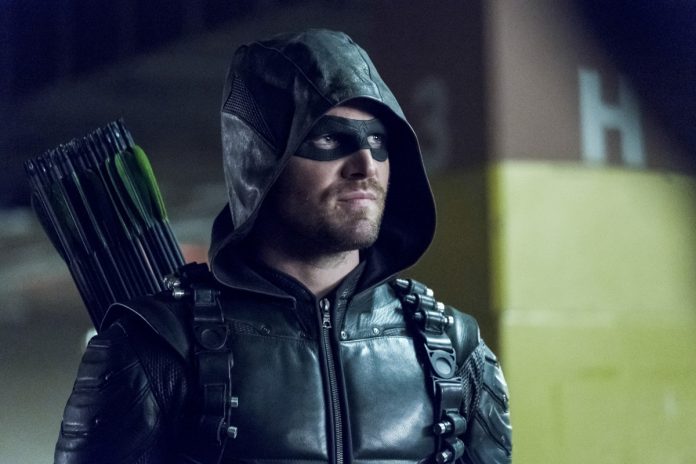 “Arrow” returns this week, and there are only 5 episodes left before season 5 of the show comes to an end. The final episodes of the season are set to be action packed, as it’s already been confirmed that both Deathstroke and Black Siren are returning.

Prometheus has been the big bad of season 5, and he’s only become even more evil since it’s been revealed that he’s Adrian Chase. The Star City District Attorney locked Oliver up in a recent episode and he tortured him until he confessed that he doesn’t kill because he has to, he kills because he likes it.

Now Oliver is torn, and he has decided to stop being the Green Arrow, but obviously he’ll be putting on the hood once again to take down Prometheus at some point, but in the season finale he’ll have to answer a very important question.

TV Line recently spoke to one of the producers of “Arrow” and they were able to get the scoop on a few new details concerning the season finale. In the finale Oliver will be saying goodbye to Lian Yu not only in the flashbacks, but once and for all in the present as well. So, it should be fun to see how the season 5 finale matches up with the pilot.

Oliver will also continue to struggle with his humanity, and he will have to decide whether he’s a killer or a hero.

“Chase keeps 10 steps ahead of Team Arrow, forcing Oliver to face his violent past and answer the question once and for all: Is he a killer, or a hero? To answer that, Oliver will be forced to let go of the fate his father burdened him with and aim for a new legacy. And as Oliver’s five years’ worth of flashbacks come to an end, you will see how he planned his escape from Lian Yu — while in the present, Oliver bids said island a final farewell.”

Oliver Queen has been trying not to kill over the past few seasons, but we can’t act like he hasn’t broken that rule in a season finale before. He did just kill Ra’s al Ghul and Damien Darhk in back to back seasons after all.

But will he kill Prometheus? Perhaps he’s recruiting Deathstroke to do his dirty work.

We’ll find out when the “Arrow” season 5 finale airs on May 24th.