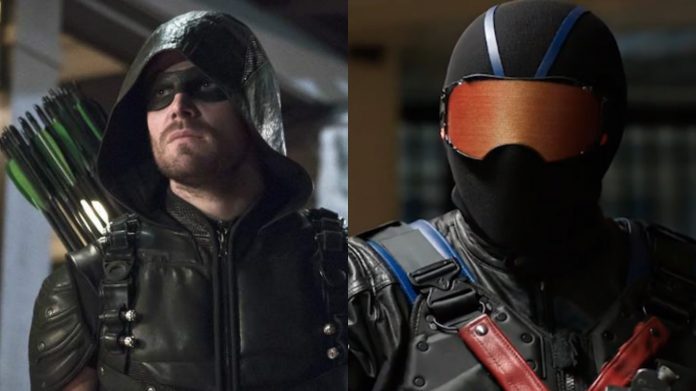 “Arrow” is returning for season 6 in October, and the show will have to pull out all the stops to top the big bad of season 5. For many fans Adrian Chase was the ultimate “Arrow” villain, and some even feel that he outdid Slade Wilson’s run as the big bad from season 2.

Related: Arrow EP On If The Show Will Get As Many Seasons As Supernatural

“Arrow” season 6 will be a little bit different as it will feature multiple villains. It’s already been confirmed that Richard Dragon will be taking on Team Arrow in the new season, and it looks like we’ll be seeing more of Helix as well. In the latest edition of EW’s Spoiler Room, it was revealed that each villain will be tied to a certain member of Team Arrow. For instance, Oliver will be matched with his former Bratva brother Anatoly, and Black Canary will be matched with Black Siren.

It wasn’t revealed who who will be matched with Vigilante, but Stephen Amell did tease that he knows who’s under the mask.

“I know who he is,” Stephen Amell says. “I’m not going to tell you who he is, but I will tell you Vigilante is a villain, if you want to call him that, for a member of the team as well.”

Fans have spent plenty of time trying to figure out who Vigilante is, but the character’s identity was not revealed in season 5, but hopefully we’ll learn the truth when “Arrow” returns.

One thing that has been confirmed is that Vigilante is someone we already know.

“As a general rule, I’m not a fan of mystery characters who when you take off the mask the audience goes, ‘Wait a minute, I’ve never seen that person before in my life,’” Executive producer Marc Guggenheim said at Paleyfest earlier this year. “I’m probably not spoiling anything by saying whoever’s underneath the Vigilante mask, you’ve seen that person before.”

Who do you think is under the Vigilante mask? Sound off in the comments below.