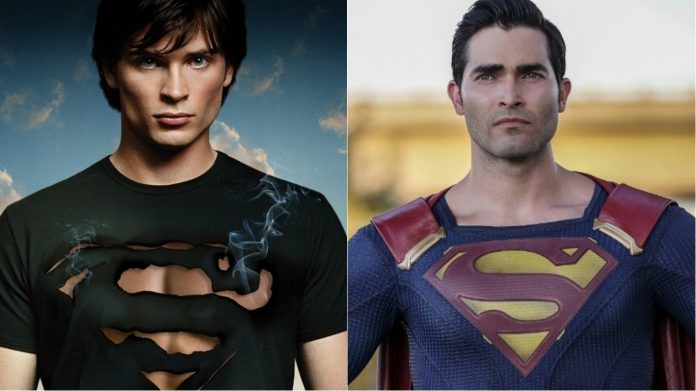 Last year “Supergirl” made the jump from CBS to the CW, and it seems that the show is now right where it needs to be. Supergirl can now interact with characters throughout the “Arrowverse” and most fans agree that season 2 was a big improvement over season 1.

Fans were excited when it was announced that Superman would be joining the show in season 2, and there were quite a few people out there who were hoping to see Tom Welling in the role. In the end Tyler Hoechlin landed the Superman role, but Tom Welling recently spoke to EW about his time working on “Smallville” and he admitted that there had been some discussion about bringing him in as Superman on “Supergirl.”

“I know Greg quite well and there had been some discussion, but they’re different worlds,” Welling says. “There was an idea that maybe Supergirl, appearing on that, but it’s such a different show. I’m older now, I don’t look the same. Appearing on that show as Clark Kent or even Superman, for me, I would not want to watch me do that at all. They just have such a different tone. To me, because this is still even a DC Universe, which wasn’t a consideration in the beginning, but Lucifer is still DC, so in some ways it’s one foot in, one foot out, but it wasn’t a motivator for me to join the show. It just so happens that it was connected in that way.”

It doesn’t sound like Tom Welling is all that interested into reprising his role as Superman at this point in time, but tights or no tights, hopefully he will make some sort of cameo in the future. As we’ve seen before with actors such as John Wesley Shipp and Mark Hamill on “The Flash” the writers love to pay tribute to the actors that helped blaze the trail they’re currently traveling on.

“Supergirl” will return in October.