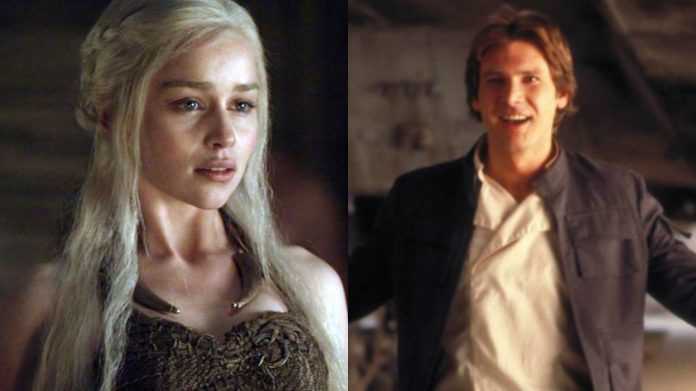 Two epic fandoms will be crossing over in 2018, as “Game of Thrones” star Emilia Clarke has joined the cast of the upcoming Han Solo standalone movie. Emilia Clarke joins Alden Ehrenreich who will be playing Han Solo, and Donald Glover who is set to play Lando Calrissian.

Emilia Clarke is heading to a galaxy far, far away in the upcoming untitled Han Solo Star Wars movie.https://t.co/5EntiY4ktq pic.twitter.com/o1M2fTWTp0

StarWars.com confirmed the casting on Friday, but as of right now it’s not yet known who she will be playing in the film. The Han Solo standalone film will follow “Rogue One: A Star Wars Story” as another film that breaks away from the Skywalker saga, and explores the broader Star Wars universe.

The film will be directed by Phil Lord and Christopher Miller.

Of course no Han Solo film would be complete without his trusty companion Chewbacca, and Han Solo himself Alden Ehrenreich recently confirmed to Variety that Chewbacca will be a part of the film.

“I think he’s going to be great in the role because he’s such a talented and interesting guy. And I can say that Chewbacca’s in the film, although I know that’s not a huge spoiler.”

The yet to be titled Han Solo standalone film is set to be released in the year 2018. The next Star Wars film “Rogue One: A Star Wars Story” will hit theaters in December.