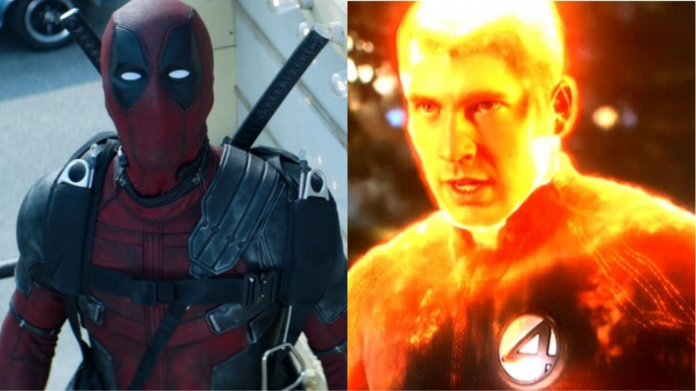 “Avengers: Infinity War” is dominating the box office at the moment, but this week another highly anticipated Marvel movie is set to be released, as “Deadpool 2” is finally hitting theaters.

“Deadpool 2” is of course made by FOX, and “Avengers: Infinity War” was released under the Marvel Studios umbrella, but Chris Evans is a man who knows both studios well.

Evans has become synonymous with Captain America over the last few years, but at one point he played the Human Torch in two Fantastic Four films which were released by FOX.

“Deadpool 2” writers Rhett Reese and Paul Wernick recently spoke to UPROXX about the post credits scenes which were cut from the film, and they revealed that one idea that was pitched would have seen Chris Evans reprise his role as Human Torch.

“There were different codas kicked around,” Wernick said. “There were more X-Force interviews that were talked about. One was Chris Evans as Human Torch.”

It sounds like the idea would have made for a pretty hilarious scene, but when asked if Chris Evans turned the idea down, Reese said that they never made it that far.

“No, no, we never got that far. Someone had the idea we actually did and we thought that was better. But we definitely had a lot more X-Force interviews with bizarre, random people coming in to interview.”

“We shot it and we put it in front of an audience. He’s got the crib and he’s standing in the German nursery and he’s leaning over the crib to do it and there was kind of this, “ohhhhh.” And we thought we don’t want to leave the crowd on an “ohhhhh.” So it ended up coming out.”

Even though these over the top scenes didn’t make it into the film, the post-credits scenes that did make it have been receiving a lot of praise, and fans will finally be able to see them with their own two eyes this week.

“Deadpool 2” will be officially released on Friday, May 18.