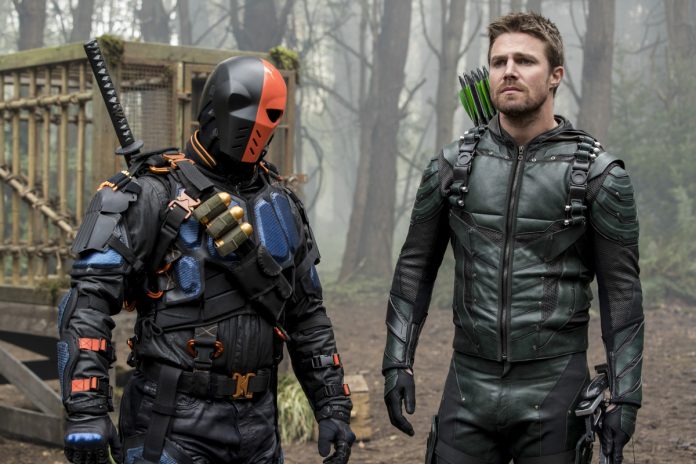 “Arrow” season 5 came to an end on Wednesday night, and the season went out with a bang, literally. Much like “The Flash” season 3 finale, the “Arrow” season 5 finale ended on a massive cliffhanger that’s guaranteed to keep fans talking all summer long.

Related: The Flash Season 3 Finale Ends With A Huge Cliffhanger

While the battle was taking place, Thea and Curtis were trying to lead Felicity and William’s mother to safety and they found a plane. They also discovered that the entire island was rigged with over 100 explosives and there was no way they would be able to disarm them all.

After Oliver defeated Adrian Chase, Chase tried to convince Oliver to kill him, but Oliver refused. Chase then revealed that he’s the trigger, and the bombs will be set off only if he dies. He then threw down a smoke bomb and disappeared.

Deathstroke, Nyssa al Ghul, Diggle, Dinah, Wild Dog and Quentin then met up with Felicity and company back at the plane while Oliver chased Prometheus.

Adrian Chase tried to get away on a boat but Oliver managed to jump onto it from a dock. They battled as the boat sped away from the island. Eventually the boat stopped and Chase revealed that Oliver’s son was on the boat.

He held William hostage and told Oliver that if he kills him, the bombs will go off and everyone else he loves will die on the island, but if he doesn’t kill him, then he would take William’s life. Oliver then shot him in the knee and grabbed William.

Chase then told him that it’s good they have each other, and it’s good that William knows what kind of man his father is. Oliver asked him what he was talking about as he put a gun to his head and pulled the trigger as the bombs exploded.

Oliver and William looked on as all of Lian Yu went up in flames. The episode then ended with the fates of Deathstroke, Nyssa al Ghul, Diggle, Dinah, Wild Dog, Quentin, Thea, William’s mother and Felicity remaining a mystery.