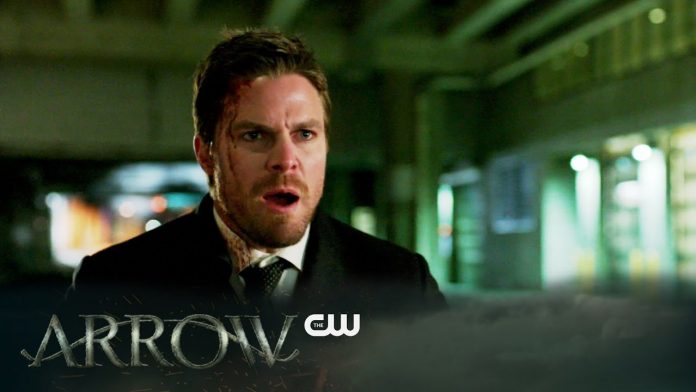 Oliver Queen has been mayor of Star City for the entirety of “Arrow” season 5, but it looks like his run as mayor could be coming to an end soon.

Earlier in the season the Green Arrow was tricked into killing Detective Malone by Prometheus and Star City PD recently named the Green Arrow as a suspect in regards to Malone’s murder.

At the end of this week’s episode Oliver Queen turned on the TV to see a news broadcast which stated that he had covered up the murder and now it’s possible that Oliver may be impeached.

Next week’s episode is titled “Fighting Fire With Fire” and Oliver will be dealing with an impeachment hearing, but from the looks of it that could be the least of his problems. The preview shows footage of Vigilante attacking Oliver Queen and it doesn’t look like Oliver is going to back down. Check it out below.

VIGILANTE ATTACKS MAYOR QUEEN — Oliver (Stephen Amell) faces his biggest challenge yet as mayor. Felicity (Emily Bett Rickards) continues down her dark path with Helix. After Vigilante attacks Oliver while he’s acting as the mayor, Diggle (David Ramsey) leads the team in a mission to stop Vigilante once and for all. Michael Schultz directed the episode written by Speed Weed & Ben Sokolowski.