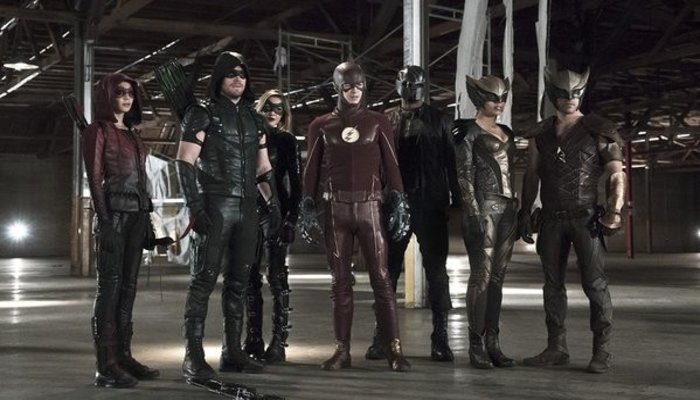 Last year the concept of Flash/Arrow crossover episodes was introduced to the Arrowverse and it was a dream come true for the fans. The first time around things were fun, but this year everyone involved with “The Flash” and “Arrow” took things to a whole new level.

#10 – Pretty Much Anything Thea Did

Willa Holland’s Thea Queen becoming an official member of Team Arrow has been one of the most refreshing things to happen to the show in a long time. Her presence was certainly felt throughout this year’s crossover and it was met with open arms. Willa Holland somehow manages to make Thea adorable but fierce and it’s beyond entertaining to watch.

She delivered some fun quotes during the crossover, but perhaps her best moment in the crossover was when Cisco told her she should have consulted him before choosing the name Speedy. Sorry Cisco but a name change isn’t happening.

We’ve known for a while now that Oliver Queen is a father in the Arrowverse. Moira Queen paid off the mother of Oliver’s son in order to keep the fact that he had a child a secret and in the crossover Oliver finally discovered the truth.

It was a heartwarming moment seeing Oliver hang out and play action figures with his son William, and we hope to see more of them together going forward. Maybe Oliver can event get his own Green Arrow action figure so that he can team up with William’s figure of The Flash. Now that sounds like an epic crossover.

During season 2 everyone was begging for Oliver and Felicity to get together. Then during season 3 of the show their relationship was a constant source of ridiculous drama and fans were begging for them to be separated. But for most of season 4 they’ve managed to work as a fun, cohesive unit. However, the crossover episodes showed cracks in the foundation of their relationship.

We get that the mother of Oliver’s son doesn’t want anyone else to know about his connection to Oliver, but does he really have to keep it a secret from Felicity? This situation just creates so much drama that’s not needed. After sitting through an entire season of a “Will they or won’t they?” dynamic it’s been refreshing to see them get along so well in season 4.

But no one wants to hear Felicity speak in her crying voice anymore. Either solve this situation quickly and end the drama, or keep them apart, it’s putting too much of a damper on the show at this point.

During last year’s crossover episode Barry and Oliver were still trying to figure each other out. This time around they’re a lot more familiar with each other and a fun friendship has formed between the two heroes. They couldn’t be any more different from each other which is why they compliment each other so well.

Oliver is often serious and brooding and Barry is normally lighthearted and optimistic. That makes for a fun dynamic when The Flash and Green Arrow team up. Plus Oliver Queen’s reaction when Barry Allen tried to hug him was just priceless.

#6 – The “Avengers: Age Of Ultron” Reference

We were all thinking it, and luckily Thea Queen said it. A bunch of superheroes heading to a farmhouse was a familiar sight in the crossover episode, because we had already seen it happen earlier this year in “Avengers: Age of Ultron.”

That’s why it was so much fun for the writers to address this head on. A little fourth wall breaking goes a long way. Especially when you’re breaking the fourth wall to acknowledge a Marvel movie on an episode of DC’s “Arrow.”

Kendra Saunders was introduced to the cast of “The Flash” a few weeks ago and we all knew what she would become. Unfortunately for Kendra however, she had no idea she’s Hawkgirl and she had to find out the hard way. It took her a little while to get it together, but once she unleashed Hawkgirl, things got pretty awesome.

We were all anxious to see Hawkgirl join the Arrowverse and Ciara Renee made her emergence worth watching. She’s definitely got our attention now and we’re anxious to see more of her when “Legends of Tomorrow” premieres on January 21st.

The introduction of Earth-2 characters on “The Flash” has added a whole new layer to the show. Now we have doppelgangers from Earth-2 jumping over to Earth-1 and things can quickly get confusing for anyone that doesn’t know what’s going on. Unfortunately for Patty, she doesn’t have a clue.

Patty is Barry’s girlfriend and Joe’s partner. She’s getting suspicious and she knows that something weird is going on. When she encountered Harrison Wells at S.T.A.R. Labs she naturally though he was Harrison Wells from Earth-1 so she shot him.

Luckily Jay Garrick was able to save Wells when he got his speed back temporarily thanks to Wells’ Velocity 6 formula. But this incident has to make Joe and Barry realize that their days of keeping secrets from Patty are going to have to come to an end soon and we can’t wait to see her reaction when she finds out what’s really going on.

Obviously we knew that the writers weren’t going to kill off the casts of “Arrow” and “The Flash” but it was still devastating to see most of our favorite characters turn to ash at the hands of Vandal Savage. Seeing everyone get obliterated so quickly was a huge shock and a true testament to how ruthless Vandal Savage can be.

We’ve seen Team Flash and Team Arrow face impossible odds before. But seeing them all get obliterated so easily was scary because it made everyone seem so powerless.

Luckily for Team Arrow and Team Flash, Vandal Savage’s deadly attack on Central City wasn’t the end of their story. We had already seen Barry Allen “ghosting” earlier in the episode so we knew that he would be time traveling at some point, we just didn’t know when.

Moments before Vandal Savage unleashed his deadly attack on Central City, Oliver told Barry to run as fast as he could and it’s a good thing he did. When Barry ran he ended up traveling through time and back to the arranged meeting with Vandal Savage that Malcolm Merlyn had setup. Barry was then able to use his experience from the first attack on Savage to help Team Arrow and Team Flash coordinate a successful second attack on the big bad.

It’s always fun seeing how time travel comes into play on “The Flash.” You know that when you see Barry Allen “ghosting” that a big moment will be coming later in the episode. Time travel is a tough concept to use in movies and TV shows and it can often make or break a story. With that being said, “The Flash” handles time travel very well and our brains appreciate the fact that it’s done with with such ease.

Although the heroes may have prevailed during the crossover episodes, we knew it wouldn’t be the end of Vandal Savage. He is the main villain of DC’s “Legends of Tomorrow” after all.

At the end of the episode we see Malcolm Merlyn collect Vandal Savage’s ashes and speak the words “You owe me one, buddy.” as he does it. Obviously Malcolm has bad intentions here. Like we said, we knew Vandal Savage wasn’t gone for good, but seeing Malcolm Merlyn play a role in Savage’s resurrection will just give us another great reason to love to hate Malcolm Merlyn.