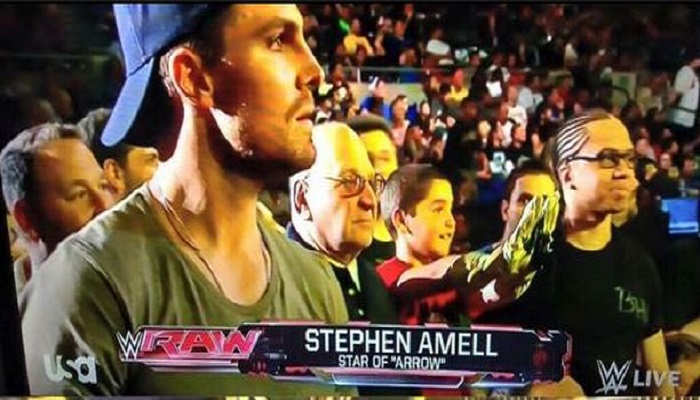 We mentioned earlier that The Hollywood Reporter has been reporting that Stephen Amell as The Arrow will face Stardust at WWE SummerSlam. Amell posted on Twitter today claiming that the rumors are “not true” but he continued to taun Stardust.

During Stardust’s match on the WWE Elimination Chamber pre-show, the commentary team mentioned Stephen Amell several times and made a point to say that he wants to get involved with WWE. WWE Superstar Stardust even changed the name of his finishing maneuver to The Queen’s Crossbow and the commentary team pointed out that it’s a reference to Oliver Queen.

Stephen has even changed his profile picture on Twitter to a picture of his confrontation with Stardust. Amell claimed on Twitter that the rumors are “not true” about him fighting Stardust, but he didn’t say anything about The Arrow fighting Stardust. Stardust also mentioned that he doesn’t want to fight Stephen and that “There must be someone else, SOMETHING else…” Which is an obvious reference to “Arrow.”

You can see the exchange below:

Lots of rumors circulating that I'm fighting @StardustWWE at Summerslam. Not true. Cody wants no piece of me.

There must be someone else, SOMETHING else . . .#SummerSlam https://t.co/emwhaq7Nvy