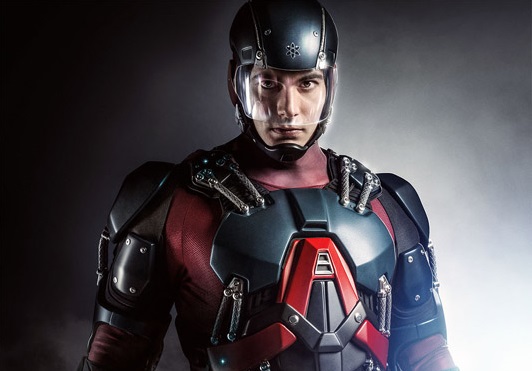 Ray Palmer has name dropped the word “atom” quite a few times in Arrow season 3 but he has yet to be officially dubbed The Atom. It looks like that’s all about to change in a new episode of The Flash as evidenced by the clip below.

Barry (Grant Gustin) is surprised when Felicity Smoak (guest star Emily Bett Rickards) arrives from Starling City along with her boyfriend, Ray Palmer (guest star Brandon Routh), who flies in as the Atom. They’ve come to visit S.T.A.R. Labs as Ray needs help with his suit. Their timing turns out to be fortuitous because it’s all hands on deck after a meta human named Brie Larvin (guest star Emily Kinney) unleashes hundreds of robotic bees to attack and kill her former co-workers, including Dr. Tina McGee (guest star Amanda Pays). A group dinner with Barry, Felicity, Ray, Iris (Candice Patton) and Eddie (Rick Cosnett) turns into a disaster.