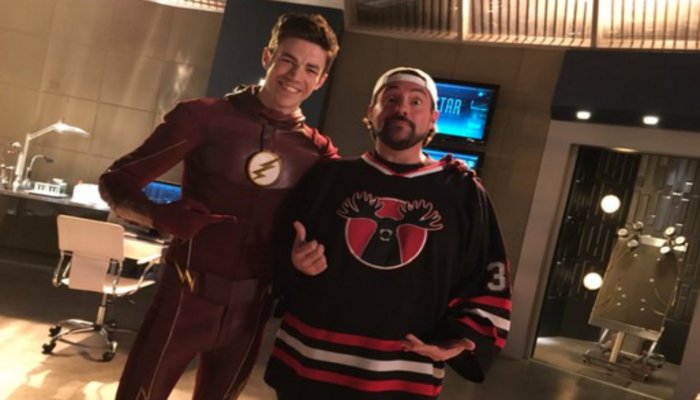 Kevin Smith directed an episode of “The Flash” while season 2 was still in production and things went well so Smith was invited back to direct another episode. The cast and crew of “The Flash” seemed to love having Kevin Smith around and several people have said that his enthusiasm for the show was contagious.

Smith recently spoke to Den of Geek and he revealed that he will be heading to the set of “The Flash” in September to film what will be episode 7 of season 3. Kevin Smith also recently said that he would love to get in the writers room for season 5 but there hasn’t been any progress on that front.

“I know I’m going back to The Flash, first week of September, to direct episode 7 of season 3. Still haven’t heard anything back from Arrow. You know, I wish, it would be amazing because I would love to write and direct Onomatopoeia in the show. Um, but I know they’re doing – what is it? – Wild Dog this year, as well as Vigilante, so maybe they’re just like ‘we don’t need you’, or whatever. But, at the moment, anyone over there raises a flag; I’m like ‘please, let me in!’ That’d be fun as f*ck.”

When it comes to the possibility of bringing his character Onomatopoeia to life in live action Smith has said in the past that it couldn’t be done but he has since backtracked on that statement.

One of Onomatopoeia’s defining traits is that he imitates sounds and Smith admitted to Den of Geek that he would be a hard character to pull off, but he has an idea for how it should be done.

“He’ll just have little cards. Business cards that have typewritten words of whatever the fuck. So instead of him saying ‘blam’, you’d find this card on your desk and turn around and ‘blam’, he’d shoot you and stuff like that. Which I think is a little more chilly, you know, for doing it in live action.”

He also added that if “Arrow” isn’t interested in using the character he hopes that he could bring him into the fold on a show like “The Flash” DC’s “Legends of Tomorrow” or “Supergirl.”