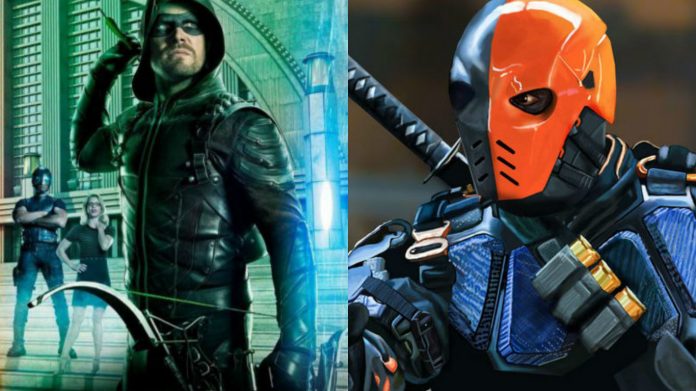 The four way “Arrowverse” crossover is underway, and now there are only two episodes left. The crossover will continue on Wednesday as the action rolls into “Arrow” and it will be a special event because “Arrow” will be celebrating its 100th episode. If you missed out on what happened during night 2 of the crossover, you can catch up via the link below.

In the 100th episode of “Arrow” Oliver Queen will wake up in a different reality, and he will be getting a glimpse at the perfect life he never had. We’ll also be seeing the return of some familiar faces. Moira Queen, Robert Queen, Laurel Lance and even Deathstroke will be returning for the episode, which Stephen Amell has called a “radical departure” from the rest of the series.

The latest promo for the episode shows Oliver Queen as he attempts to adjust to his new reality while preparing to marry Laurel Lance. You can check out the promo below.

ARROW CELEBRATES 100 EPISODES; THE EPIC SUPERHERO CROSSOVER CONTINUES — Oliver (Stephen Amell) wakes up to a life where he never got on The Queen’s Gambit. Robert (guest star Jamey Sheridan) and Moira Queen (guest star Susanna Thompson) are alive and well. Laurel (guest star Katie Cassidy) is his loving fiancée and their wedding is imminent. Everything seems perfect, but Oliver starts to notice small imperfections that make him question this new reality. Meanwhile, Felicity (Emily Bett Rickards) and the recruits take on a new threat with help from The Flash (guest star Grant Gustin) and Supergirl (guest star Melissa Benoist). James Bamford directed the episode with story by Greg Berlanti and written by Marc Guggenheim & Wendy Mericle (#508).