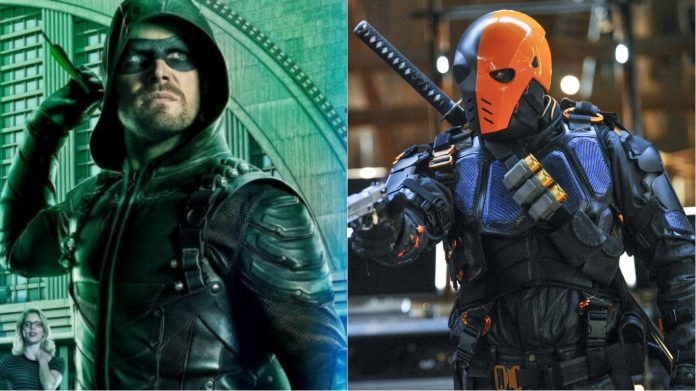 “Arrow” has never ended a season with such a massive cliffhanger before, and it’s highly unlikely that every character is going to be returning to Star City. Today we’re going to look at 5 characters who probably met their end on Lian Yu.

This one has unfortunately already been confirmed, as John Barrowman posted a video shortly after the finale saying that although Malcolm Merlyn’s death took place off screen, he is in fact gone from the show.

There are many fans out there who don’t want to accept that Merlyn is gone. After all, he’s been there since day one and it’s really sad to see him go.

However, it seems unlikely that Barrowman would deliver such a heartfelt goodbye to the fans if he isn’t really gone, and he already confirmed a few months ago that he is not returning for season 6.

An off screen death obviously gives the writers the chance to retcon this decision completely and bring him back in the future if they choose to, but it seems that as far as the powers that be are concerned, Malcolm is dead for now.

Captain Boomerang hasn’t really been all that vital to the “Arrowverse” in general, and the fact that he returned for the “Arrow” season 5 finale was somewhat of a surprise.

The character presumably met his death when he was hit by the same explosion which is believed to have killed Malcolm Merlyn.

Much like Merlyn’s death, Captain Boomerang appeared to have died off screen, and there’s been no confirmation regarding his fate either way.

In the end Captain Boomerang is nothing more than a side villain in the “Arrowverse” and he served his purpose by turning on Team Arrow in the finale. If he wasn’t being used much before it’s unlikely that the writers will go through the trouble of trying to explain how he survived.

It’s so hard to say goodbye, but in order to create some serious drama, the stakes have to be high, which means at least one member of Team Arrow should probably be killed off.

Curtis certainly evolved in “Arrow” season 5, and he’s a welcome addition to the team, but at the end of the day his skill-set is quite similar to Felicity’s, so it’s not hard to see why Curtis could have been potentially been killed off in the finale.

If Curtis doesn’t survive then he will be missed, but luckily through the invention of his T-Spheres, his legacy can live on.

A few seasons ago Oliver Queen took a trip to Central City, and he ran into a woman from his past. That woman turned out to be the mother of William, a little boy who is the son of Oliver Queen.

William was a plot point for a few episodes in season 4, but for the most part the show ignored the fact that Oliver Queen has a son until the end of season 5.

Adrian Chase kidnapped William and brought him to Lian Yu, and although we know William is alive and well, there’s a good chance William’s mother didn’t survive.

The theme for “Arrow” season 6 is going to be family, so it makes perfect sense for William to become a bigger part of the show, and leaving him without a mother gives the writers the perfect excuse to have Oliver take him under his wing.

Deathstroke is without a doubt one of the most popular characters in the history of “Arrow” but his popularity may end up working against him. With Joe Manganiello set to wear the mask in the film universe, DC clearly has big plans for Deathstroke in the DCEU, which unfortunately usually means bad things for the “Arrowverse.”

Fans have been calling for the return of Deathstroke for quite some time now, and many of us had given up hope. It was certainly a welcome surprise to see Deathstroke return in the finale, and Slade once again became a relatable and likable character.

Following the finale there was also a lot of chatter among fans about Deathstroke potentially getting his own series, but despite the demand for it, DC probably won’t pull the trigger.

It’s been obvious for the past few years that the DCEU clearly takes priority over the “Arrowverse” and Warner Bros likely won’t want Joe Manganiello’s Deathstroke to be overshadowed by Manu Bennett’s popularity.

Absolutely no one wants to see him go, but if Slade does meet his end at least he found a little bit of redemption in the season finale.

However, there’s hope that he may have survived because a plot thread concerning the search for Slade’s son was added to the finale, and it will be a shame if the show doesn’t expand on that.