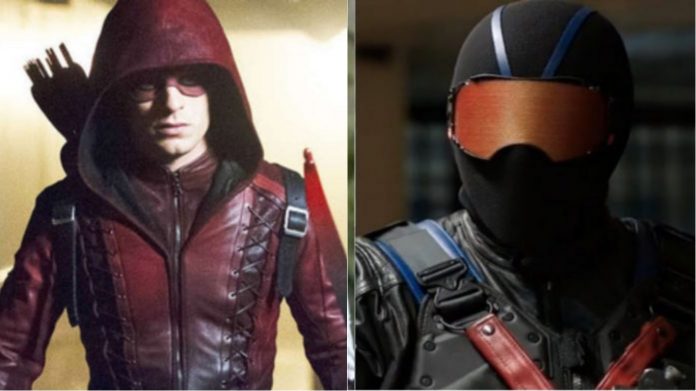 When Josh Segarra was cast for “Arrow” season 5 it was announced that he would be playing Vigilante, but the powers that be pulled a fast one on the fans, and Josh, because when he arrived to the “Arrow” set for his first day of work they told him that he was actually playing Prometheus.

It was a wonderful twist that played out perfectly, but the question of who’s under the Vigilante mask still lingers. Vigilante was featured prominently in the first half of “Arrow” season 5, but his identity was never revealed. Luckily it’s been confirmed that Vigilante will be unmasked in season 6, and it’s been teased that the person under the mask has a personal connection to a member of Team Arrow.

It was also recently confirmed that Roy Harper will be returning to “Arrow” in season 6, and during a panel at Heroes & Villains Fan Fest in New York this weekend a fan asked David Ramsey if Roy Harper is the one under the Vigilante mask.

“You’re looking at me because you know I give spoilers, aren’t you? Um, I don’t know. Colton’s coming back. Colton’s great, we really miss him a lot. He brings a great energy to the show, and Roy Harper’s terrific. So um, that’s an interesting idea, but I don’t know.”

Ramsey then struggled to keep a straight face as he tried to claim that he hasn’t been told anything about Vigilante.

Showrunner Wendy Mericle has teased that the Vigilante reveal will blow fans’ minds, and if the character is revealed to be Roy Harper it’s safe to say a few minds will be blown.

Hopefully they won’t drag out the reveal for too long after the show returns. We’ve already waited long enough.