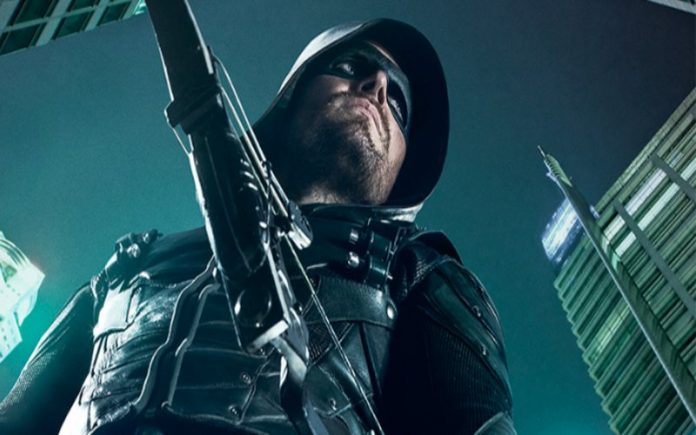 “Arrow” finally returned for season 5 on Wednesday, and the episode kicked off with the Green Arrow battling Anarky who was trying to detonate a bomb. During the battle Oliver attached a special arrow to the bomb that allowed Felicity to hack into it.

Green Arrow stabbed Anarky through his arms with an arrow and pinned him to a wall. Then he knocked him out. Oliver then approached the bomb to find Wild Dog trying to disarm it. He threw Wild Dog up against a wall, told him it was taken care of then shot him with an arrow through the leg before telling him to stay off the streets.

Thea was giving an announcement at an event on behalf of the mayor, when Oliver showed up at the event. Thea ridiculed him for not being a good enough mayor, he tried to guilt trip her for leaving the team.

In the flashbacks we got a glimpse of Oliver fighting a man to the death in Russia. After the fight Oliver met with a man who was giving him money for winning the fight. Oliver told him he doesn’t care about the money, he was promised something else, he’s looking for info on Kovar. The man told him that Oliver wasn’t supposed to kill the fighter because he was their top earner, then someone hit him with a taser from behind.

Back at the Arrow lair Felicity suggested that Oliver recruit Wild Dog, and Evelyn Sharp, but Ollie didn’t seem so enthused about the idea.

We then see some corrupt cops kill some criminals, which prompted Tobias Church and his gang to show up and kill them.

Back from the break some legit Star City police officers showed up at the scene to investigate as the Green Arrow watched from the shadow. They brought up Quentin Lance and noted that he’s back in town and talked about possibly giving him his badge back.

Oliver showed up at Lance’s house and asked him how long he’s been back. Lance was sleeping on his couch surrounded by empty booze bottles, and he told Oliver that he broke up with Donna Smoak. Oliver tried to recruit him for Team Arrow, but Lance poured himself a drink.

Ollie asked if Lance was going to show up to the Black Canary ceremony, and he told him it’s probably best if he doesn’t.

Back in the flashbacks Oliver was tied to a chair being interrogated by a Russian man. The man questioned him about his book with his list of names.

In the present Oliver returned to the lair and Felicity gave him some intel on Tobias Church. Felicity told him he can’t go after Church because Church has a crew, and he doesn’t.

Oliver leaves as Curtis Holt shows up and Felicity convinces Curtis to look into Wild Dog.

We see a shot of Tobias Church declaring his intentions to go after the Green Arrow.

Oliver gives a speech as he presents the Black Canary statue. Quentin Lance stands in the crowd and sulks, the cries when he sees the statue.

The ceremony is attacked by thugs working for Tobias Church who kidnapped Oliver Queen.

Back at the lair Felicity, Curtis, Lance and Thea tried to figure out a way to find Oliver.

We cut to Oliver who is tied to a chair and Oliver told Tobias Church that if he’s waiting for the Green Arrow, the Green Arrow won’t be coming. Oliver tried to cut a deal before telling Church he’s stupid.

In the past Oliver is once again tied to a chair, and a man throws away his book. Anatoly visits Oliver and then sets him free. Oliver tells him he’s here to kill Kovar.

Back in the present Thea and Lance have a heart to heart about why she left Team Arrow.

We then see a corrupt cop beating up Oliver who’s still tied to a chair. Oliver broke free and then broke the cops arm, then broke his neck and killed him. Thea showed up in her Speedy gear to rescue him.

Back at the lair Thea criticizes Oliver for killing. He tells her that if killing means he can save lives then he’ll do whatever he has to do. Thea tells him she wants nothing to do with it before leaving.

Felicity once again tells Oliver that he needs to put a new team together. They argue. Curtis wandered the streets looking for Wild Dog and he was attacked.

Oliver called Diggle while he was at the Black Canary statue, but Diggle didn’t answer. Lance showed up with a list of Star City police officers that Oliver can trust.

The show then cut to a flashback and revealed that Laurel made Oliver promise that she won’t be the last Black Canary before she died.

Oliver, Lance and Felicity then teamed up with the officers Lance recommended to save some hostages from Tobias Church. They got the hostages out, but a bomb exploded and Church escaped in a helicopter.

Oliver shot an arrow at the helicopter and climbed up to attack Church, but Church threw him out. He then shot a trick arrow that turned into a parachute.

The show then cut to Oliver Queen holding a press conference talking about police corruption. Oliver announced that the four officers Lance recommended will report directly to him and they will try to end corruption in Star City.

Tobias Church rounded up a group of criminals and told them they all needed to band together to take over the city.

Back at the lair Oliver told Felicity she was right about him needing a new team. Curtis Holt then showed up and demanded that he be a part of the team.

In the past Anatoly took Oliver to meet with the Bratva, he told him if he survives he can begin the process to become Bratva. Oliver was then attacked by a group of Russians.

In the present Oliver and Diggle had a little Skype session, and Oliver asked Diggle if putting a new team together is a good idea, Diggle told him it is.

The show then cut to Felicity going home to the loft. She sat on the couch and a man came up from behind her and rubbed her shoulders then kissed her. We see the man’s face, it’s revealed he’s Detective Malone, one of the officers that Oliver is working with.

A Star City police officer was leaving the police station when a hooded figure appeared from the shadows. It turned out to be Prometheus. He shot the officer with an arrow then attacked him with a sword to end the episode.