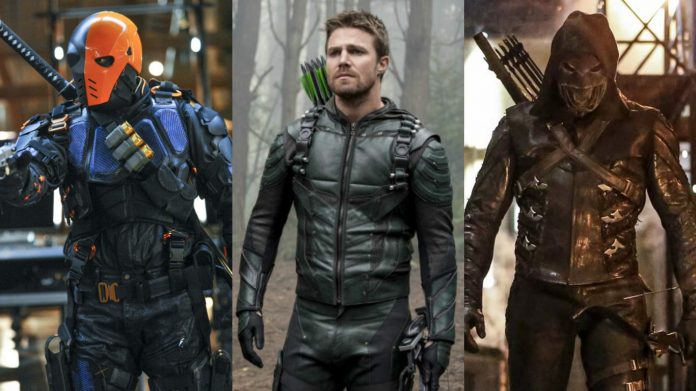 “Arrow” recently wrapped up its fifth season, and most fans seem to agree that the recent season was one of the best. Everyone knows that a season of “Arrow” is only as good as its villain, and Josh Segarra’s Adrian Chase/Prometheus has been getting a lot of praise among fans and critics alike.

Adrian Chase pushed Oliver Queen over the edge and by the time season 5 wrapped up the show had come full circle.

During a panel at Heroes and Villains Fan Fest in London this weekend, Stephen Amell was asked to choose his favorite “Arrow” villains, and he said that Manu Bennett’s Deathstroke was marvelous. He added that he doesn’t think of John Barrowman (Malcolm Merlyn) as a villain because he knows him, and then he went into his thoughts on Prometheus.

The theme of “Arrow” season 5 was legacy, and the season wrapped up a 5 year story arc. The show wouldn’t have been able to come full circle without Prometheus at the forefront, and Amell picked Chase as the best villain.

“Someone put a comment on my page,” Amell said via Comicbook.com. “They’re like, ‘You gotta check out this guy’s page for the reaction video!’ I didn’t really know about reaction videos and then I ended up on a deep dive all the way to the season finale, and I swear to god, a man and a woman, everyone as they were watching the final scenes they went, ‘Full circle! Full circle! Full circle!’ And that, to me, meant a lot. So, I think that Josh [Segarra] and the Prometheus villain probably fit the very best into a season but I think that from an iconic standpoint, it’s certainly the best one.”

“Arrow” will return in the fall with season 6.