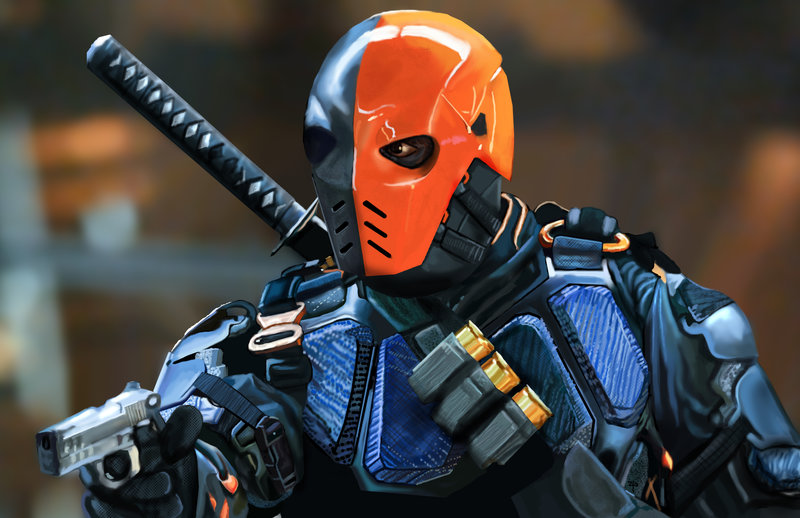 “Arrow” season 5 is set to premiere in a few weeks and the new season will feature the 100th episode of the show. The cast and crew have been hyping up the 100th episode on social media, and rightfully so, not many shows make it to 100 episodes.

The 100th episode of the show is going to be special, and it’s going to feature some appearances from former cast members.

He recently posted a photo of himself and David Ramsey standing next to someone who has been covered up in the photo.

It’s not easy to see who’s under all that green, but shortly after Amell posted a photo of the mystery guest, he followed up with a photo of himself and Deathstroke sitting on a park bench.

Fans have been hoping to see Deathstroke return to “Arrow” for quite some time now, but the return of Slade Wilson has seemed unlikely because it’s been confirmed that Joe Manganiello will be playing Slade in Ben Affleck’s Batman film. However, it doesn’t look like Deathstroke’s involvement with the Batman movie is a factor here.

A fan commented on Amell’s photo saying that Deathstroke can’t be on “Arrow” because he’s in the Batman movie, and Amell responded by saying “This photo is from today.”

It looks like they’re pulling out all the stops for the 100th episode of “Arrow” so even if Slade doesn’t return for an extended storyline, it looks like he will likely be making a one-off appearance on the show for just this episode.

It was recently revealed that Katie Cassidy will be appearing in the 100th episode, and actor Jamey Sheridan, who played Robert Queen has also been confirmed.

Producer Marc Guggenheim said that Robert Queen’s appearance will have nothing to do with flashbacks or “Flashpoint” so it should be interesting to see how the show brings back all of these characters from Oliver’s past.