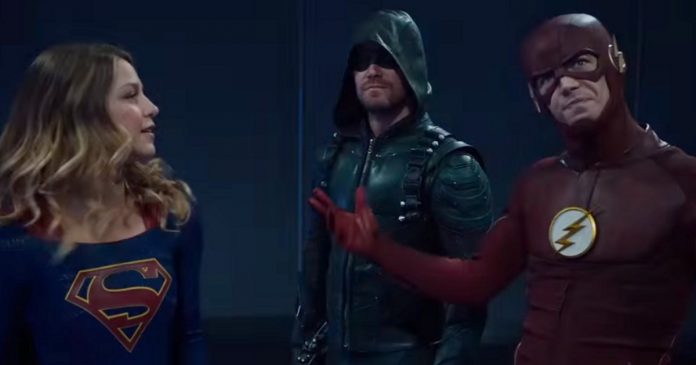 “Supergirl” is joining the CW for season 2, and it’s been rumored for months now that her world would end up merging with the “Arrowverse.” Producer Andrew Kreisberg recently spoke to EW, and he shot the rumor down, saying that her world will remain separate.

“Not for her entire world, but Kara will be traveling from her dimension to our dimension, “our” being the world that The Flash, Arrow, and Legends lives in.”

Although Supergirl’s world will remain separate, we’re still going to be seeing a massive crossover later this year, when the heroes of “Supergirl,” “Arrow,” “The Flash,” and “Legends of Tomorrow” team up. The crossover will span across all four shows and it’s been confirmed that the heroes will be battling the Dominators.

Tyler Hoechlin will be making his debut as Superman in the season premiere of “Supergirl” and Kreisberg also revealed what it is that ends up bringing Superman to National City.

“The two of them actually show up to the same crisis. It wasn’t a turf war, they just both heard about the same tragedy on the news and both flew into action. But they haven’t really gotten a chance to spend time together, especially since she’s come out as Supergirl, and they both want that. Both of them have a bit of sadness about them, they both have that sense of feeling alone, they both have that sense of feeling different, and both of them remark that that loneliness, that alienation, that isolation goes away when they are together. Part of what these episodes explore is that they don’t get that because of the machinations of the plot and of the actions of Project Cadmus, the villains; they both have homes to defend and they have to defend their own turf.”