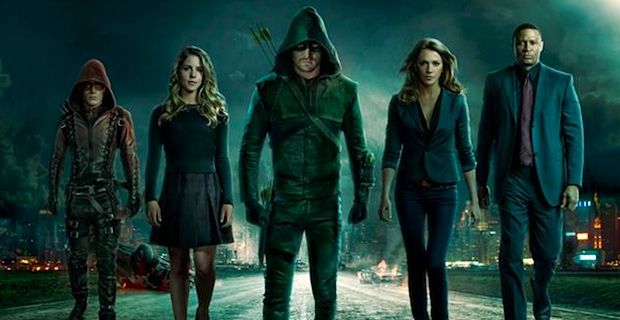 Arrow Executive Producer Mark Guggenheim recently talked to Entertainment Weekly about some big things still to come in season 3. He talks about Oliver facing off against Slade once more and Thea possibly learning his secret. You can check out some highlights below.

What can you tease for Oliver going up against Deathstroke (Manu Bennett) on Lian Yu?

It feels like a coda to season two. It’s not just the final battle, but the final interactions between Oliver and Slade that we didn’t have the screen time to do at the end of season 2 because you’re racing to the end of the season. It’s nice to be able to write a little bit of an epilogue for these two characters. It’s not to say it’s the last time we’ll ever see Slade again, but certainly the story of Oliver versus Slade, the revenge for Shado’s death, that’s the kind of stuff this puts a nice capstone on. When we see Slade again, he’ll be in a different headspace. We’ll take his character in a new and different direction.

It looks like Thea finds out about Roy being Arsenal. Will she also learn Oliver’s big secret?

The answer to that really depends on whether or not you watch Canadian television. I’m not going to compound it by confirming that here, but the internet is a big place, so I’ll just leave it at that.

Hes making reference to a new promo for the show which contains some spoiler-esque scenes. You can check it out by clicking HERE.