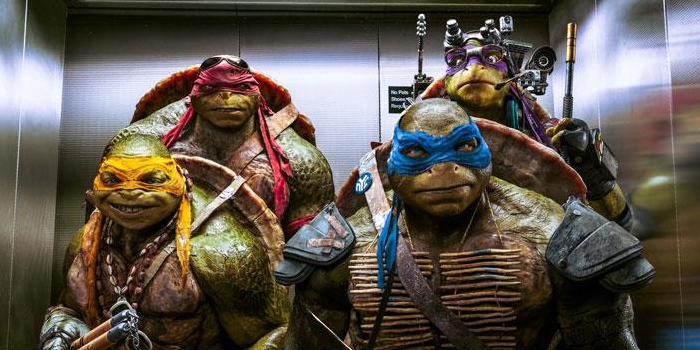 Unless you’ve been living under a rock for the past 30 years then chances are you’re pretty familiar with the Teenage Mutant Ninja Turtles. Quite the bizarre concept indeed but these reptilian ninjas have been making their way into our hearts and homes for quite some time now and it looks like they’ll be around for a while. This group has seen many different incarnations across platforms like film, television, video games and comic books each of which has helped their popularity grow over time.

The Teenage Mutant Ninja Turtles have had quite the career but here’s a few things you might not know about them.

#8 – Super Shredder Was Played By A Professional Wrestler

Super Shredder was one of the coolest parts about the film Teenage Mutant Ninja Turtles: Secret of the Ooze and he only becomes cooler once you know he was played by professional wrestler Kevin Nash. That’s right Big Daddy Cool Diesel himself was the man under the mask. This kind of makes us a little sad that we didn’t get to see him hit one of the turtles with a powerbomb.

#7 – There Was Once A Female Ninja Turtle

If you’re a fan of the Teenage Mutant Ninja Turtles then you’re probably pretty familiar with the lineup. The fantastic foursome consists of Leonardo, Raphael, Michelangelo and Donatello but did you know Fox tried to integrate a female into the mix?

Fox tried to add a female character called Venus into their show Ninja Turtles: The Next Mutation which aired between 1997 and 1998. Somewhere along the lines someone realized that this was a huge mistake and Venus just disappeared from the show with no explanation, never to be seen again. You can see her in action in the video above.

Uncle Phil and Shredder are two of the most infamous characters to ever appear on television but it might surprise you to know that they’re very much connected. James Avery (R.I.P.) who played Uncle Phil on The Fresh Prince of Bel Air was the voice of Shredder on the Teenage Mutant Ninja Turtles TV show. Very menacing indeed.

#5 – Shredder’s Costume Was Inspired By A Kitchen Utensil

If you’ve ever thought that Shredder looked a lot like a kitchen utensil you’re not that far off. The creators of the Ninja Turtles came up with the idea for Shredder’s armor after coming into contact with a cheese grater in the kitchen. They liked the cheese grater so much that they originally toyed with the idea of naming Shredder “The Grater.” Good thing they went with Shredder instead.

Here in the states we’ve never known them to be anything but the Teenage Mutant Ninja Turtles but some countries actually refer to them as the Teenage Mutant Hero Turtles. Apparently the word ninja just isn’t politically correct anymore.

#3 – Michelangelo Had His Name Misspelled For Years

If you thought that Michaelangelo was a weird way to spell a name you aren’t wrong at all. The famous orange wearing Teenage Mutant Ninja Turtle Michaelangelo was supposed to have his name spelled Michelangelo but it was misspelled in the first issue of the comic book so the creators just went with it. The character kept this incorrect spelling until 2003.

#2 – The Turtles Were Once A Touring Band

Did you know that these famous mutated turtles once went on tour? Back in the 90s the turtles went on the “Coming Out of Their Shells” tour which featured the group playing awesome songs while wearing some of the most ridiculous outfits ever. Yeah, the 90s was a weird decade.

#1 – Shredder Died In The First Issue Of The Comic Books

Shredder is not only the most famous villain in turtle folk-lore but he’s also one of the most well known villains in the world. He’s a total bad ass with that cheese grater face mask but he wasn’t bad ass enough to survive the first issue of the Teenage Mutant Ninja Turtles Comic Book. Poor old Shredder was killed off in the same comic book her premiered in but as we know deaths never last long in the comic book world.